CVFD is looking for Men and Women to join our team to serve as Firefighters and/or Emergency Medical Techs.Don't have the training? Don't worry we offer both in house and paid training opportu...
➜
Purchase of Fire/Rescue UTV 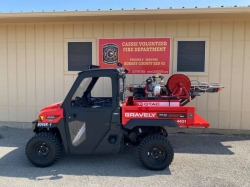 The wakes range from 2-6 feet that day. CVFD Firefighter J. Nugent and Fire Chief D. Curtis responded to Big Chief RV park with Command 1 4460 and Rescue boat 4430 and launched to begin the search.

Once in the water Chief Curtis spotted the overturned boat. LT. Sanchez and AFC. Pennington stay on shore.

the Rescue boat navigated the rough water and made contact with the sailboat within 5 minutes of being launched. 2 victims were pulled from the water and returned to the shore with no injuries reported. Their boat was later picked up.

This call lead to CVFD giving Life Saving Awards to Burnet Co SO and Llano Co dispatchers and to a Llano County Deputy.

CVFD will Award Firefighters for this call later in the year.

CVFD was called to a structure fire at Noon today!Eastlake Buchanan VFD, Burnet, Hoover Valley VFD, Burnet Fire/EMS were also toned in AutoAid But canceled after the initial Interior attack. The building was saved along with the boat, Ranger and golf cart that was parked inside.Also Thank you to Bur...
➜
Search for Person on land
Cassie VFD was Requested to respond to Inks Lake State Park to assist Hoover Valley VFD and TPWD search for 2 hikers, who were lost on a trail.CVFD Command 1 4460 arrived on scene with Chief 4401. HVVFD requested to launch our UAV Drone 1 to assist in searching for the hikers.
➜
FM 690 Dump truck wreck

at 14:16 hours Cassie VFD, Burnet EMS, DPS, and Burnet County SO was dispatched to the area of SH 29 and FM 690 for a dump truck rollover.CVFD was first on scene at 14:21 hours to find that actual location was just south of Cassie gate 1 on FM 690 everyone was out of the truck.CVFD Chief Curtis requ...
➜
Single vehicle wreck SH 29

Cassie VFD, Burnet EMS, and Burnet Co SO responded to a single vehicle wreck on west SH 29 in the early morning hours of Friday.
North Task Force toned for structure fire for City of Burnet FD

20:14 hours Cassie VFD was toned to staged at the station for Structure fire off of FM 2341 in East Lake Buchanan VFD district. Chief 4401 responded from the City of Burnet and made scene just after ELBVFD Engine 2, to a fully engulfed house and catching a second house on fire.
➜
Structure Fire, Mutual aid for Hoover Valley VFD
Hoover, Valley, Burnet EMS, Burnet VFD and Cassie VFD toned to the 100 blk of Iroquois dr in Hoover Valley for a structure fire. upon arrival of HVVFD heavy smoke, fire knocked down. reduced all other incoming units.
➜
Small fire on the side of the road
at 0913 hrs. on CVFD was toned to a fire started by children.Command 1, Engine 1 and Brush 3 responded to the call.Chief 4401 cancelled Brush 3 and informed Dispatch the fire was out and advised the parents of the fire.all units cleared at 0931 hrs.
➜
1 of 1
11 entries in the Call history
BURN BAN STATUS

This site has been viewed 37,893 times.
Calls
News
Events
Pictures
Apparatus
FollowTweet
Maintained by the members and staff of Cassie Volunteer Fire Department. Designated trademarks and brands are the property of their respective owners. Copyright © 2006-2021. YourFirstDue Inc. All Rights Reserved. Content on this web site is supplied by Cassie Volunteer Fire Department. YourFirstDue Inc. cannot be held responsible or liable for any content, text, pictures, or any other media found on this web site.
Management login
Powered by